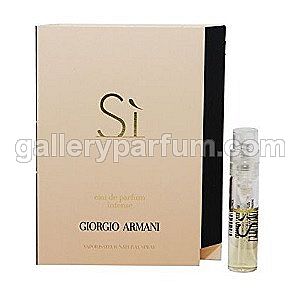 rmani Si was launched in 2013 as a sweet scent of cassis, rose and vanilla. In 2014, Armani introduces its enhanced version Armani Si Eau de Parfum Intense. The new version is designed for a strong and passionate woman who is brave and not afraid to take risks. Such woman is conceived as very charismatic, confident, independent and sophisticated.

"Denser" and richer than the original, Si Intense is described as a modern chypre fragrance. It opens with accords of cassis and black currant heart extract. There are also fresh notes of mandarin and bergamot with a silky touch of freesia. The heart develops with essence of May rose and neroli absolute, with additional accords of davana and osmanthus. The base features patchouli, vanilla, ambroxan and woody notes.